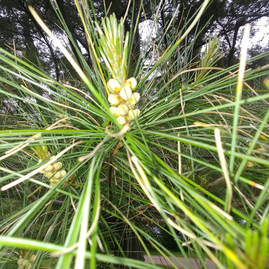 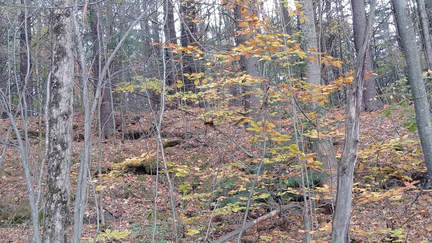 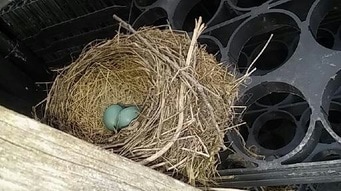 Waxing May 2017; Sivan 5777
Dandelions are seeding abundantly fuzzy in the Champlain Valley 'banana belt' while in the North East Queendom of Lowell, they are just opening amidst quaker ladies, lobelia, and foamflower. Up there in the north lands striped maple flowers hang in delicate fronds while oak & beach (latercomer deciduous trees in this region since last glaciation) leaves begin to open. Meanwhile by the microclimate of Lake Bitawbagok, nettles, yellow dock and burdock are prolific in their medicinal offerings, cottonwood fluffy seed trails line bike paths, while spruce and cedar sprout lime green baby needle tips. Deep in the forest oven birds, white throated sparrow, and blackthroated green  warblers call while companions gather food for the young. This robin nest at the Intervale Conservation Nursery seems to have been recently abandoned. 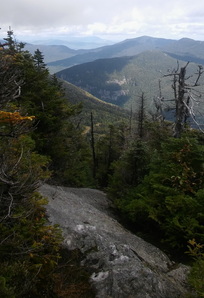 Waning September 2016; Elul 5776
As sarsparilla leaves begin to speckle soon to disappear into the forest floor in the hardwood zone, hobble bush greens maroon while birch and aspen leaves golden. Only smaller bodies of water are still swimmable comfortably though the initial submerge is already cooler in the chilling air. Herons are still here though seen in flight more often, perhaps fattening up before their departure. Gentle light frosts have begun to creep into the valleys while bunch and mountain ash berries deepen red in the alpine zone. Plump grapes and dappled apples hang from boughs while squirrels scamper and milkweed stems blacken. Golden rod yellows and aster purples remain aglow though some of their companions lead the way in fuffy seed heads releasing as light shifts. 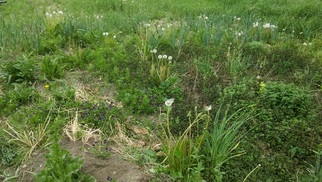 Waning May 2016; Iyyar 5776
Bobolinks wizeeoo around rising field edges. Last week’s delicate goldthread blooms & hobble bush’s fragrant blossoms herald in the ebbing  of ephemeral season while middle and upper forest sinusium layers fill in. Coltsfoot seeds in fluffy tufts as leaves emerge while already leaved dandelions also soften the green carpet with whispy potential. Marsh marigold carries the yellow baton in wet places where celandine also glows. Wild chervil’s white blooms line dirtroads in frondy networks. Baby American toads are on the move as are spotted fawns, slowly following their mothers carefully. Black flies have hatched.  Rose colored baby oak leaves grow and green in their newcomer ways, since they were one of the later deciduous trees to return north after the last ice age.  This birthing season gifts us with so many windows already passed, happening now, & yet to come in our beloved trophic web. 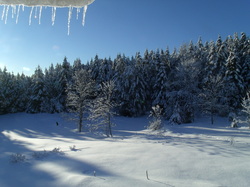 Waxing January 2015; Shevat 5775
These past few days in the North East Kingdom of Vermont have been glorious high pressure gifts with the raw freshness of winter awakening. At dusk, coyotes howl against pink silhouetted skies where spruce and fir, laden with snow, stand as wisdom emissaries. Trails of potential mates crisscross, leaving 'tandem marks' amidst surrounding, untouched canvas. Vast meadows glow, tucked in snow firm enough to ski upon and yet permeable enough to allow deer hooves and fox paws to sink in leaving fuzzy trails. Lady bugs alight inside a wood and solar heated timber frame home while luna moths lay curled up in cocoons of leaves under red squirrel highways on the forest floor. 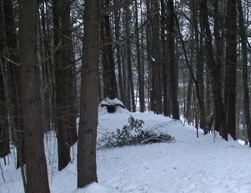 Waning December 2014; Kislev 5775.
The other day a female golden crowned kinglet flitter fluttered around a Red barberry bush nibbling lingering berries, plump with moisture. Red squirrels skittle from holes in the snow where middens of white pine cone scales remain. Fresh palish yellow wood splinters lie on snow where pileated wood peckers were excavating a meal of diapausing insects. This is the time when Basketglider dragonflies lie beneath ice in larvae phase while ermine and snowshoe hare can romp around almost hidden. Snow flakes that once clung to each other in crystalline geometry (hydrogen bonds on the molecular level; cosmic bonds on the ethereal) are now merged in compression. This week frozen droplet-glazed trees released many a limb in heart cracking snaps. How deeply are the bears and frogs dreaming? As the dark increases, what ancient light can we rediscover? 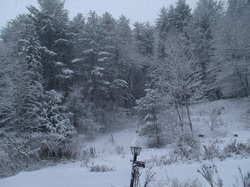 Waxing December, 2014; Kislev 5775.
Light is so precious this time of year in the northeast when it appears @7am and begins to disappear @4pm. The snow covered forest is like a text of tracks written by red and grey squirrels, white tailed deer, voles, red fox, coyote, grouse... Their story/ies remain somewhat of a mystery and yet are part of ours and those who under the bark, mud, or have travelled to warmer lands, don't leave tracks. Lately I have been seeing several hawks perched on highway edges. What do you feel when you spot nooks where bird nests are at this time of transparency? 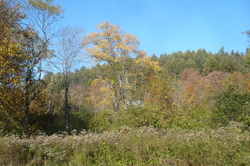 Middle of October, 2014; Chesvan, 5775.
Most maples are naked now leaving their deciduous kin such as beech, birch, and ash to continue the radiant dance in pumpkin and golden hues. The naked branches tipped with buds ready for next season's life emanate a violet hue. Canadian geese continue to sprinkle the air with their songs and aligned formations as they head south where food and fairer habitat awaits them. Amphibians and reptiles have been seen lingering in wet grass and leaf laden trails absorbing the last remaining waves of radiant sunlight before they will venture down and within. Herons and kingfishers fatten up along the water's edge before they head to southern lands to join their already arrived and some still migrating winged kin. Winter resident song birds spread out now across the forest, sharing territory and mixing in diverse flocks. Native and honey bees hover around last hoorahing asters, cosmos, goldenrod, and lobelia blossoms. Hooray for late bloomers. May their delayed nectar provide nutrient rich sustenance for their guests to endure the coming cold. Bird nests become visible amidst limbs now naked. Up in the mountains moose court and mate while in the lowlands deer do so amidst hunting two-leggeds. Squirrels scurry around and soil is wet. Many hardy ferns and understory plants remain green like the evergreens, not yet touched by the imminent frost. 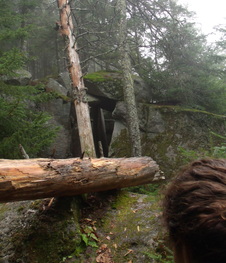 Waning October, 2014; Tishrei, 5775.
Women's Within the Wild Series began today amidst a wet, bone touching morning. Droplets hung from wet limbs stretching nearby where larch glowed within a misty stage; lichen swelled, emanating vibrancy. Surely we could feel the thinning of the veils as we ascended wet rocks below tinkering Juncos and Kinglets. As we gingerly held what we were about to release, gleaning last minute teachings from these now excess layers/patterns, strong north west gales swept across the boreal peak we climbed and took our offerings away. Ravens spoke as we allowed for transformation in the pause between. Surprise openings appeared amidst the shape-shifting clouds and we were able to glimpse the Winooski river snaking through the Piedmont valley, west to the Green Mountains. Lingering Mountain Ash berries hung above where Hay Scented Ferns yellowed and hardy pink Asters offered their last blossoms. As we descended in gratitude, feeling the freshly opened space for new pathways, we felt the trees' protection and waxing Chesvan's moon potential.